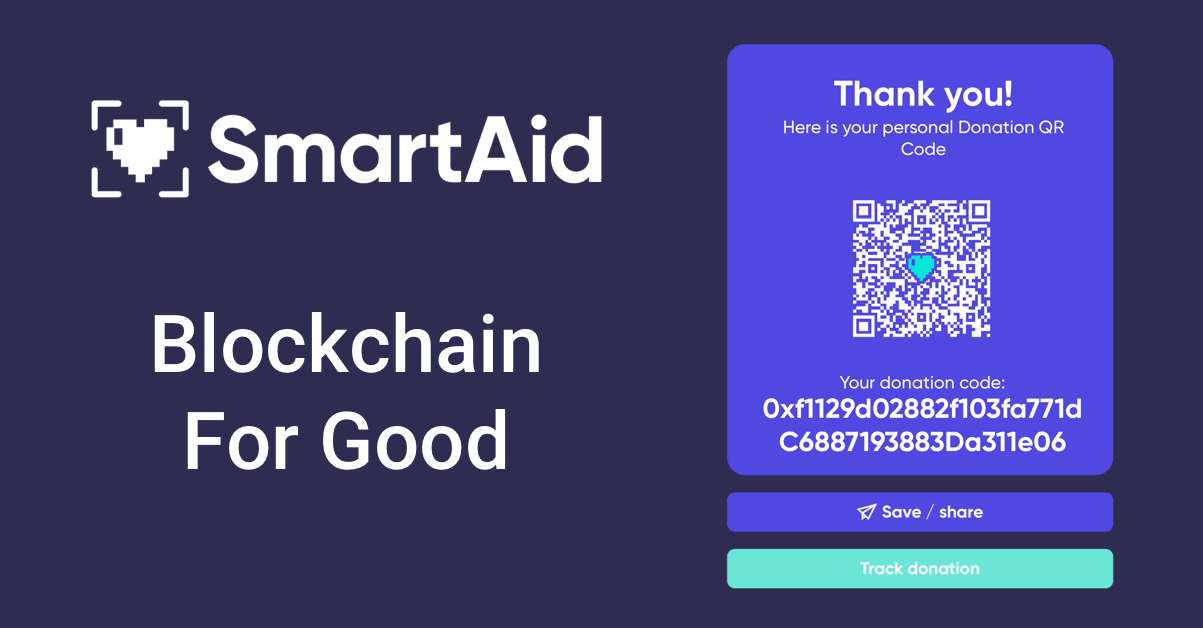 Donating money to charity requires a high amount of trust in the receiving organization. Therefore, we integrated what the Economist called “Trust Machine” into SmartAid – the next generation of donation platform. Of course, we are talking about blockchain technology here. Yes, the Bitcoin blockchain consumes a lot of energy. Yes, the Ethereum blockchain has been used to scam people by selling worthless investments to naive investors. However, when blockchain technology is applied right, it allows creating multiple benefits. At SmartAid, we use blockchain technology to make donations transparent and to let you follow the journey of your giving.

1.  Transparency
Transactions on the most blockchains are visible publicly. Everyone can have a look at what is happening on a so-called Block Explorer, like Etherscan. This allows for high transparency.

2. Immutability
Once a transaction is documented on a blockchain it cannot be reversed or manipulated. There are two reasons for this. First, the history of transactions is maintained by multiple parties at the same time. Second, the block structure does not allow to change old entries, since manipulating a past entry makes all following invalid.

3. Programmability
One major advantage of blockchain technology is that their transferable value units, also called tokens or coins, are at-will programmable. This allows for automation but also new types of money, e.g. which are individually distinguishable.

For SmartAid, we created a private, permission Ethereum-based blockchain network to document every incoming donation. This kind of system allows for high transaction speed at almost no transaction costs. Further, using a private network is very energy efficient since SmartAid blockchain does not require the energy-intensive consensus mechanism ”Proof-of-Work”, which is used by Bitcoin.

Each incoming donation is documented on our SmartAid blockchain as an individual and unique “donation currency” (ERC20 contract). Like we have Euro (EUR), US Dollar (USD) and Pound sterling (GBP) in the real world, we have Alice Donations Tokens (ADT), Bob Donation Tokens (BDT), and Charlie Donation Tokens (CDT) on the SmartAid blockchain. By creating an individual donation currency for each donation, you can identify your very own donation tokens by the donation code, which you receive after the payment. This looks something like that:
0x5B1dac0A3CbC5A5CE265fb2cC666d267057E5618

To make sure that the money (EUR) is transferred from your bank account to the account of the projects you want to support., we integrated PayPal as our payment service provided. As soon as you hit the donate now button and finish the payment process, PayPal will notify our SmartAid system, and we create your Donation Token for you. The organization will receive your donation in EUR via PayPal and also a digital representation of your donation, which is documented on the SmartAid Blockchain.

With the help of the EU funded innovation accelerator program Blockpool, we are currently developing a system, which we call “Donation Token Manager”. This feature will allow SmartAid projects to allocate the token representations of your donation to different budgets. As soon the project organization allocated your Donation Tokens into a budget you will be able to see that on your donation tracker.

Read more about our Token Manager System in our next post. Stay tuned.